Capitol riots a chapter in US' legacy of violence

I don't need to tell you what happened at the US Capitol last week.

Videos and pictures do a good enough job of that. We all saw the angry crowds massing in support of US President Donald Trump in Washington, DC. We saw them break into the halls of Congress to overturn the certification of last November's election, and we saw them ransacking offices to their hearts' content. Though five were killed in the melee, we also saw most of them getting politely escorted out by Capitol Police.

That lax level of security was a far cry from the militarized phalanxes present during the Black Lives Matter protests in the city last summer, raising a heap of questions about why one of the most secure buildings in the world was supposedly taken by surprise. Since the details of this were in the planning for months, these questions are well worth asking. For my part, it isn't too difficult to connect the dots — especially after it was revealed how many of the rioters were off-duty police and military.

Nonetheless, many breathed a sigh of relief when the vandals were vacated. No doubt some will consider the inauguration of Joe Biden on Jan 20 the end of a protracted national crisis.

But that's a dangerously simple outlook. This didn't begin with Trump, and it won't end with him either. Too easily we forget the US is a country built on slavery, with land forcibly taken from indigenous populations. The first draft of the US Constitution —right below high-minded passages about "a more perfect union" — deemed Africans property, three-fifths of a whole human being. That's not a legacy that can be shaken off easily, and near-impossible when so many in power deny its significance.

This might seem an odd tangent, but what happened on Capitol Hill makes broader context even more essential. After a traumatic moment like this, there's an understandable desire to return to normalcy — but that's a risky thing to do. Any doctor will tell you it's pointless to treat symptoms without curing the underlying condition.

I'm tired of the oft-repeated refrain of "this is not who we are" from Americans in denial of their own country's history. The hordes who attacked Congress are the people who jeered students attending integrated schools. They're the people who formed lynch mobs. MAGA and QAnon are just the John Birchers and Klansmen of yesteryear. Make no mistake: This is an old, abiding hatred with a fresh coat of paint.

But I also want to correct another irritating myth that's been making the rounds. For too long the US media has portrayed Trump's most militant and unhinged advocates as members of an aggrieved working class, or rural people "left behind" by globalization. While there are certainly pockets of support in those communities, the data shows by and large they opt out of elections completely — and after multiple administrations and little material benefit to show for it, who would be shocked?

No, the majority of Trump's base is financially comfortable enough to care about the phony culture war propagated on news outlets and social platforms; they could, after all, take time off to come to Washington, book hotel rooms and deck themselves out in high-priced weaponry and tactical gear. Safe to say someone working low-paying jobs with no benefits — now risking their lives every time they leave the house, thanks to the US' criminally negligent pandemic response — has more important things to worry about.

So while Trump's base has, for the most part, a greater degree of security than the wage laborers they look down on, it's still not the ironclad stability the truly powerful enjoy. They make enough to feel invested in the system through property ownership and some expensive baubles, but not where they have any say in their own futures. Due to this "in-between" status, they identify strongly with their exploiters while blaming those below for hampering their success.

That manifests itself in furious resistance to any hint of social progress. To them, life is a zero-sum game, where if someone else wins they must by definition lose. Any concessions granted to an "other" — like, say, Black Americans who want their basic rights — is territory lost on an imagined battlefield.

Though scapegoating is a longstanding US practice, recent trends have accelerated the process. This reactionary rot, festering as it has for countless decades, was inflamed by the consolidation of capital and the monopolistic control of information through enormous tech companies. With users' worst impulses aggravated by an infinite-growth model of engagement at any cost, insulated, self-selecting fiefdoms formed. The more outlandish and incendiary the posts, the better the numbers — and the greater the algorithmic rewards.

This goes double for the corporate media, the self-styled purveyors of "real news". For years they regarded Trump as a curiosity, a surefire source for ratings. They invited him on late night talk shows and hung on his every word, and their bottom lines soared. The bonanza paid such fat dividends that not even the 2016 election gave them pause. Instead of much-needed soul-searching, they engaged in the bankrupt practice of "both-sidesism", which treats monstrous political views as identical to their exact opposite.

Even more offensive was the language they used to describe the attack. Everywhere you looked, you'd see some newscaster or commentator throw around terms like "Third World" or "banana republic" when talking about the violence. The implication is clear: This sort of thing can only happen in faraway, uncivilized places. Putting aside the racist connotations of such remarks, brutal force has been administered on workers and oppressed minorities for centuries, whether by mobs or the state itself. Think of the Tulsa and Colfax massacres. Wounded Knee. The Haymarket affair. Kent State. And that's only a small sampling. Pretending this wasn't a 香港到內地物流grown phenomenon is an act of shameful denial.

It's particularly ironic to use "banana republic" to deflect, because the term comes from US-backed corporate coups! The "banana republics" had their governments overthrown by conglomerates like the United Fruit Company to maximize profits and maintain a sphere of influence. In their rush to deny US culpability in this insurrection — and, by extension, their own — media outlets invoke violence it perpetrated.

That's hardly coincidental. For decades, the US has fomented insurgencies across the world to achieve its political and economic aims, planting the seeds of color revolution to punish anyone who didn't toe the line. Invasions and bombing campaigns were just the tip of the iceberg; even if outright regime change efforts didn't work, endorsing and funding turmoil across the globe would at least destabilize any dissenters. Well, the chickens have come 香港到內地物流 to roost. The Contras are at the door.

By cultivating a base of paranoiacs and providing wink-wink nudge-nudge approval for their conspiracies, the right wing and their corporate backers laid the groundwork for this attack. They throw up their hands and ask for peace — but only now, when their personal safety is under threat. Up to that point, they were perfectly happy to stoke the flames of hatred and resentment to further their own agendas.

So if they want to know who's responsible for this sad state of affairs, they don't need an FBI investigation.

They need a mirror.

The author is a US writer with China Daily. The opinions expressed here are those of the writer and do not represent the views of China Daily and China Daily website. 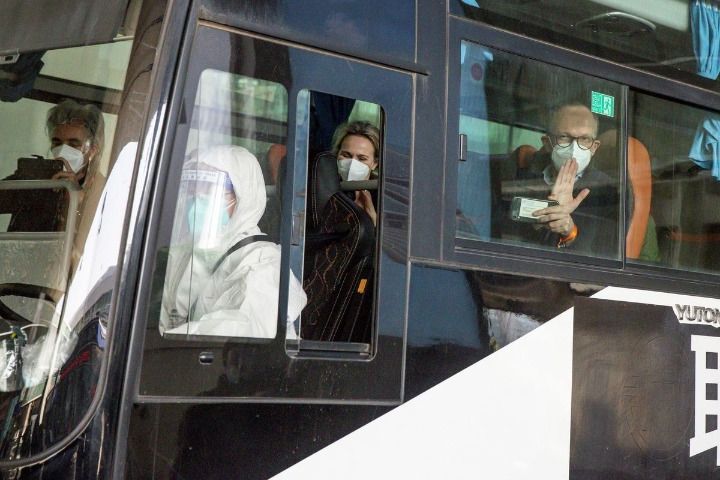 Is it time to abandon the overwork culture?

US, not China, biggest threat to global security

Bruce Connolly
Top
BACK TO THE TOP
English
中文